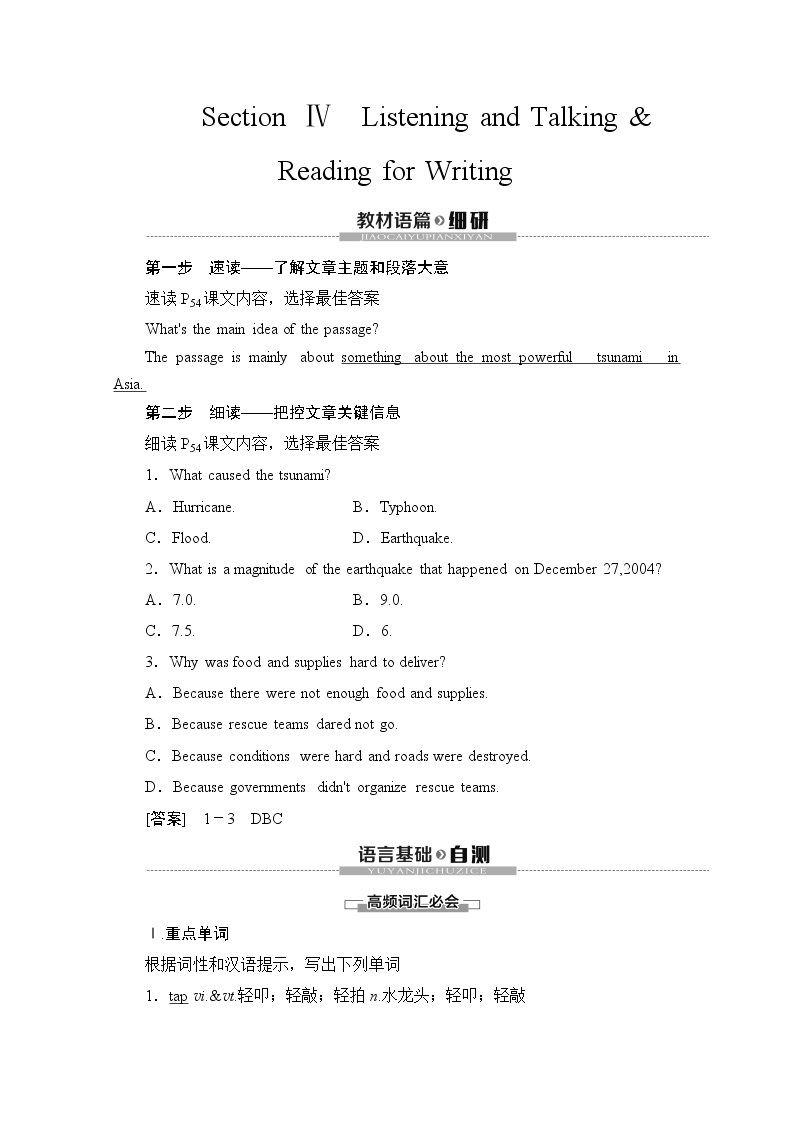 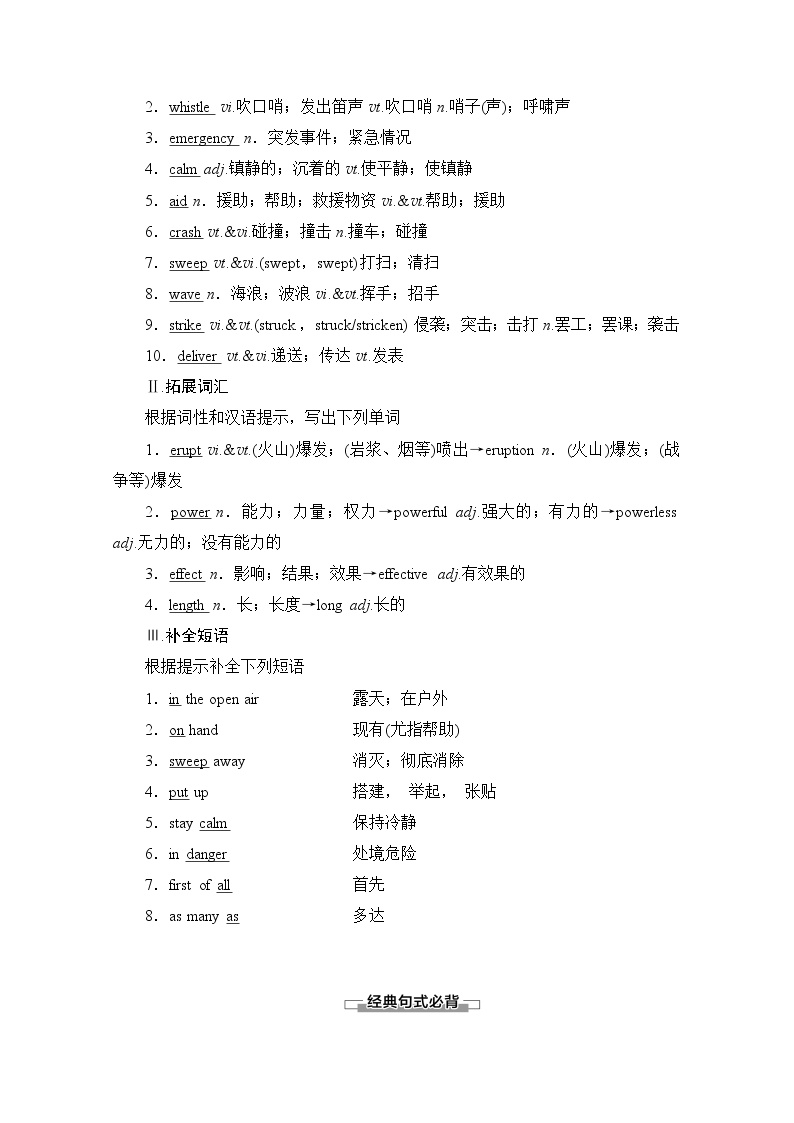 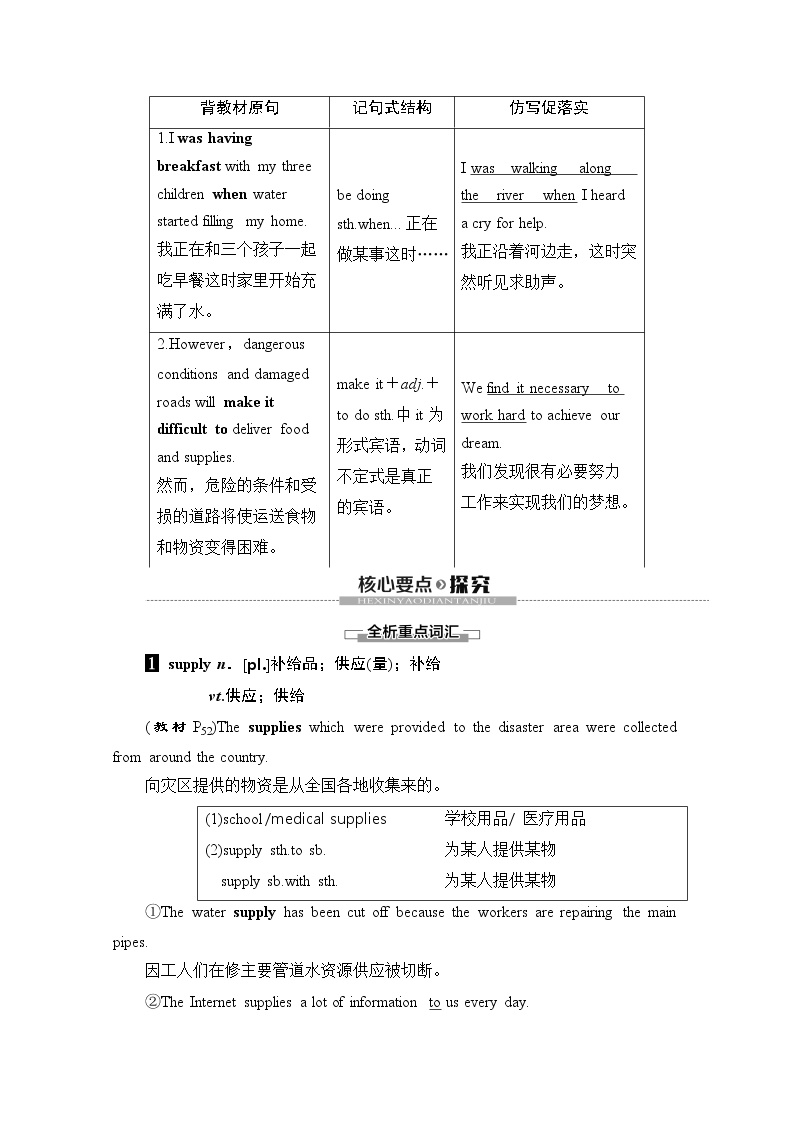 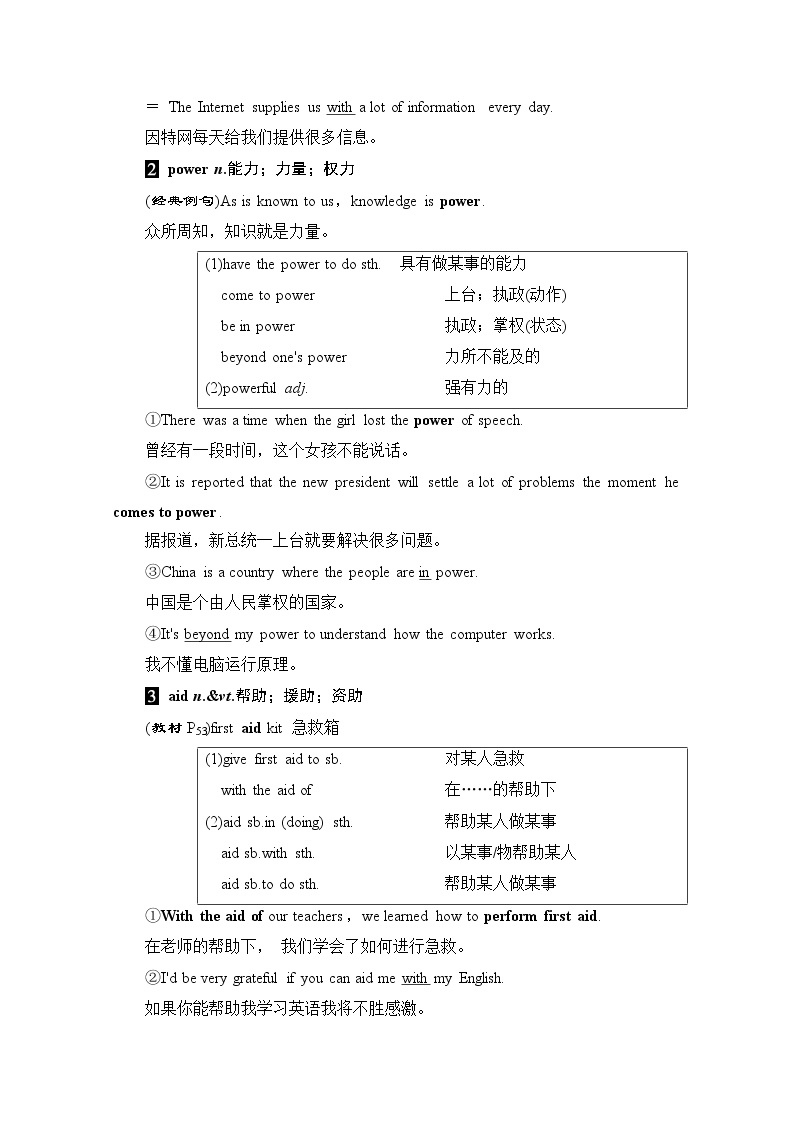 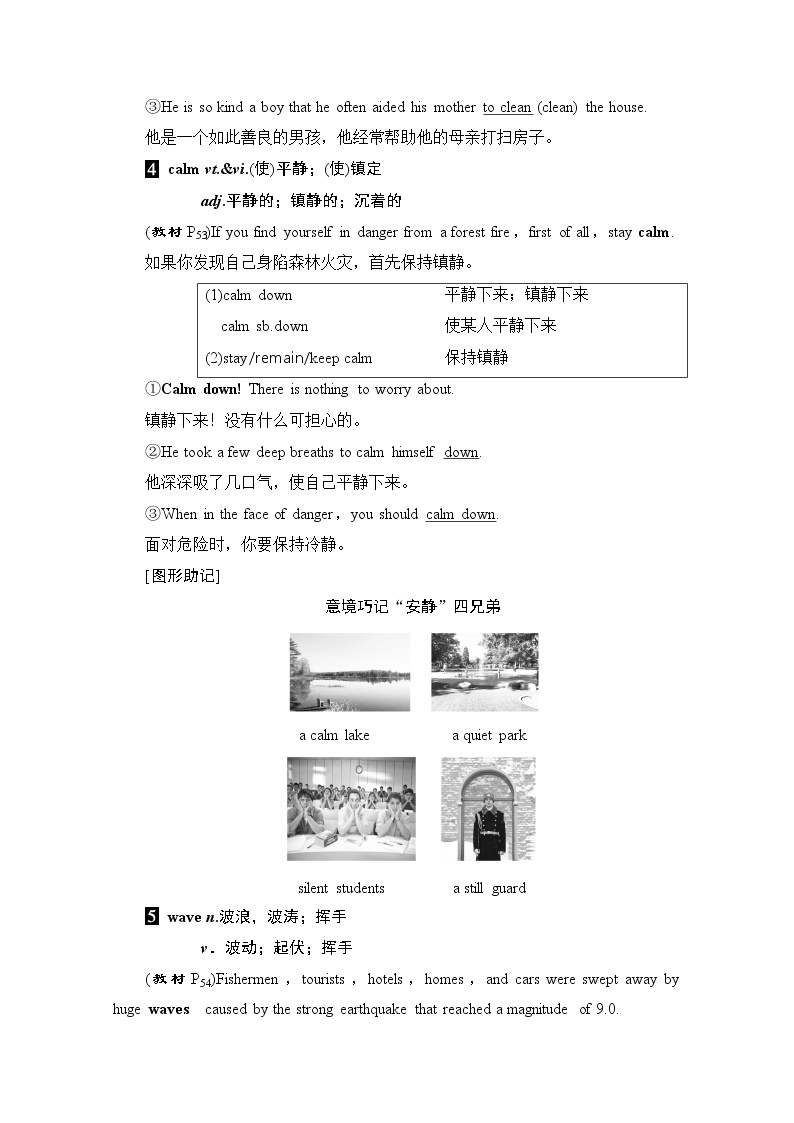 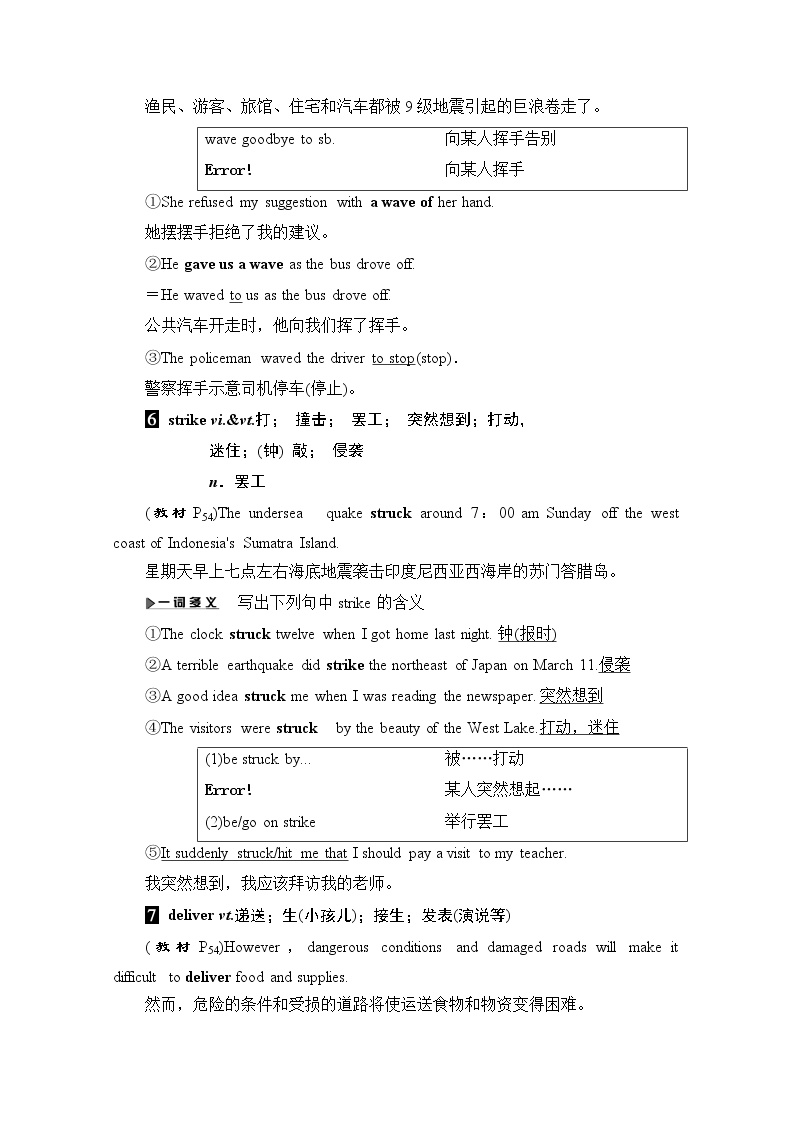 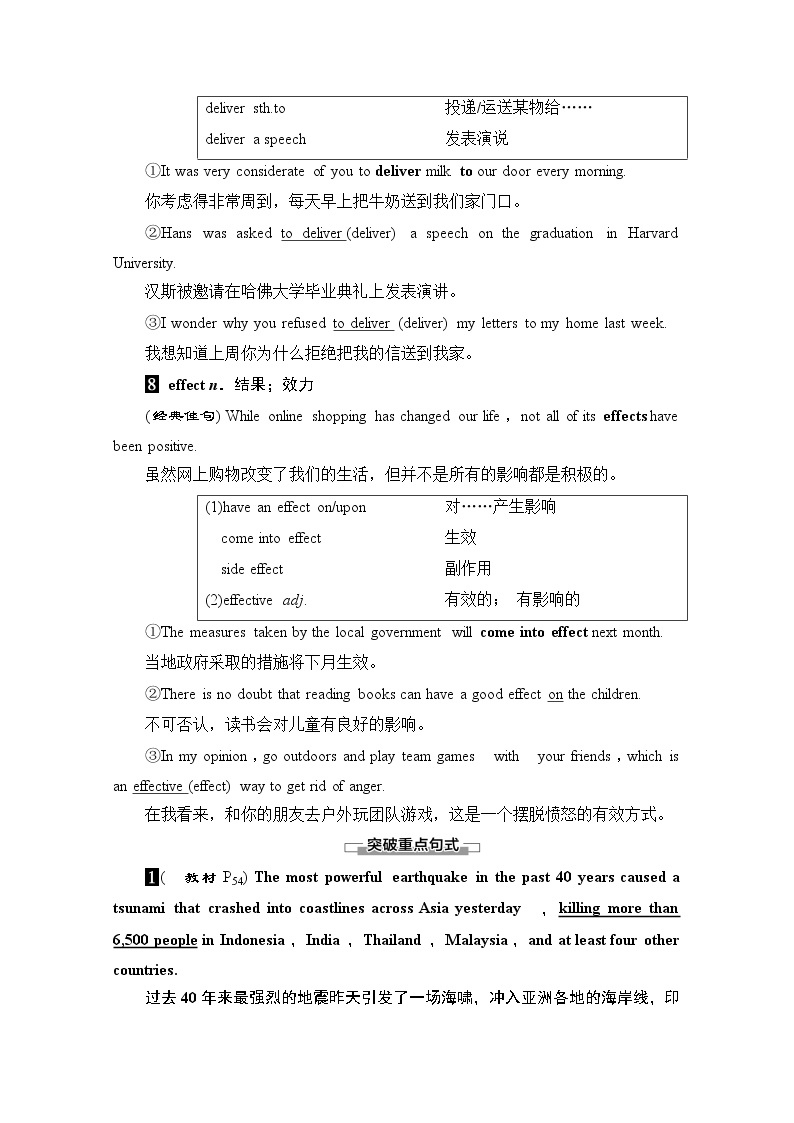 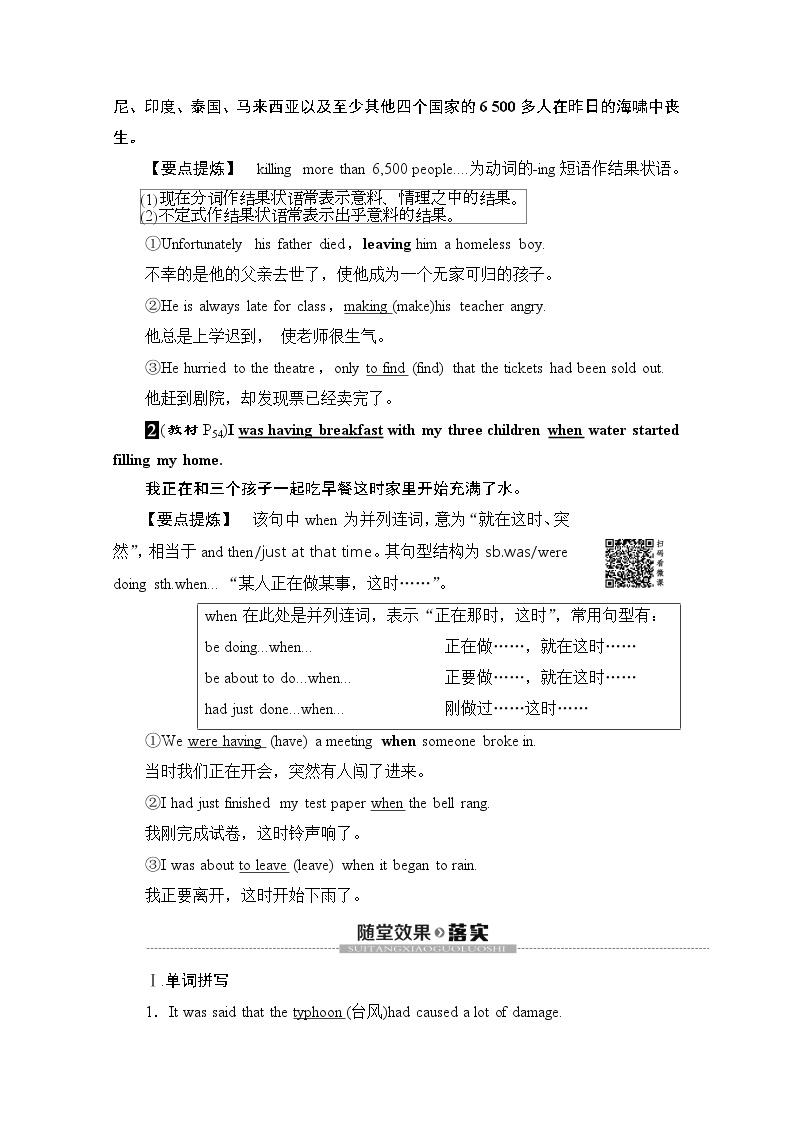 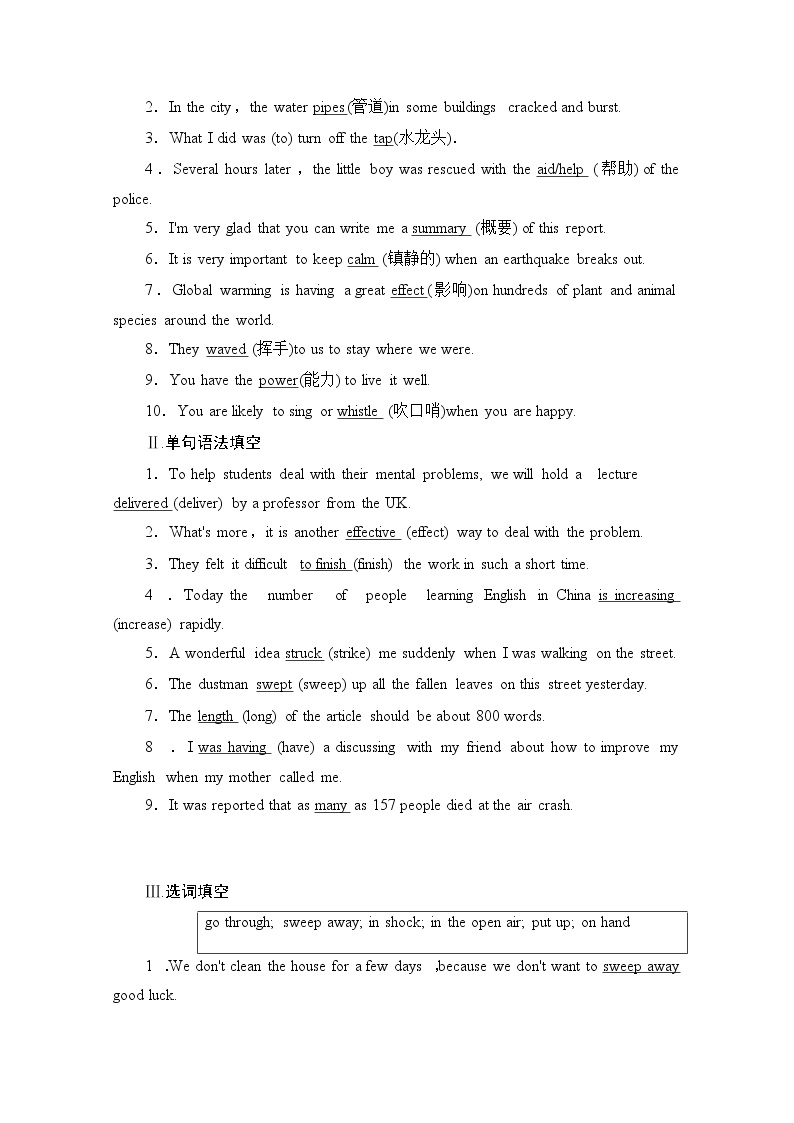 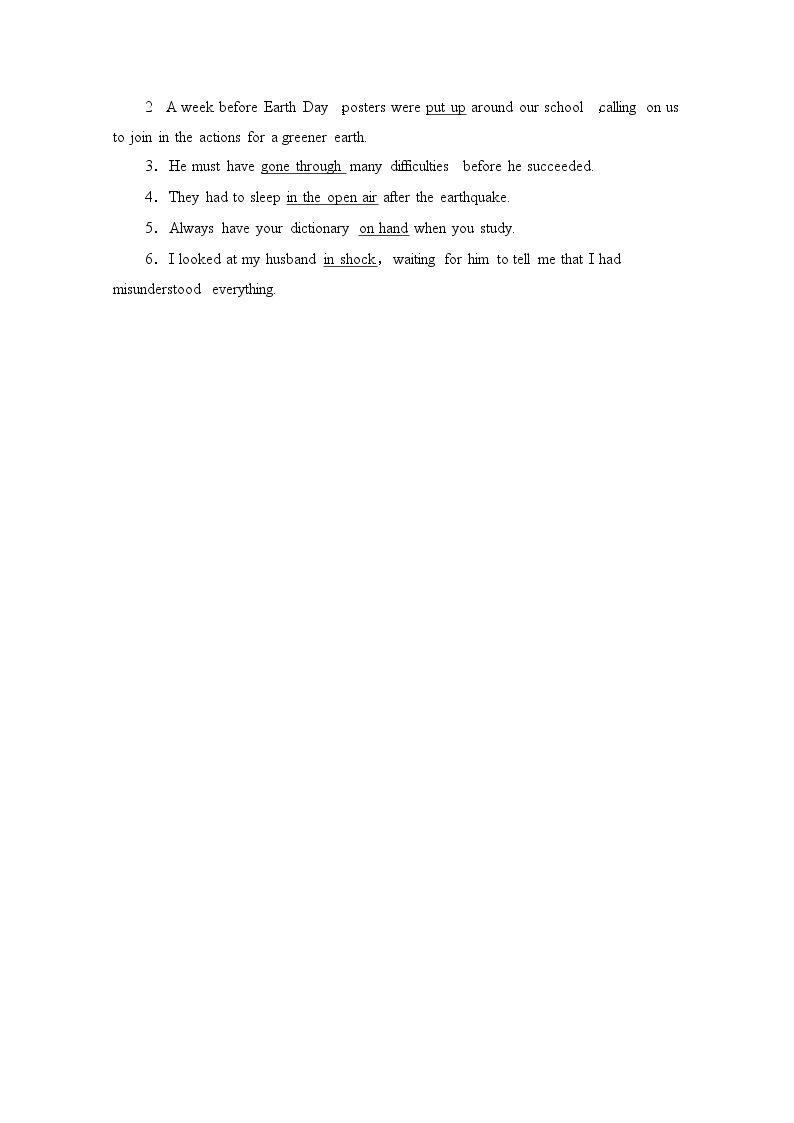 What's the main idea of the passage?

The passage is mainly about something about the most powerful tsunami in Asia.

1．What caused the tsunami?

2．What is a magnitude of the earthquake that happened on December 27,2004?

3．Why was food and supplies hard to deliver?

A．Because there were not enough food and supplies.

C．Because conditions were hard and roads were destroyed.

(教材P52)The supplies which were provided to the disaster area were collected from around the country.

①The water supply has been cut off because the workers are repairing the main pipes.

②The Internet supplies a lot of information to us every day.

＝ The Internet supplies us with a lot of information every day.

①There was a time when the girl lost the power of speech.

②It is reported that the new president will settle a lot of problems the moment he comes to power.

③China is a country where the people are in power.

④It's beyond my power to understand how the computer works.

①With the aid of our teachers，we learned how to perform first aid.

②I'd be very grateful if you can aid me with my English.

③He is so kind a boy that he often aided his mother to clean (clean) the house.

①Calm down! There is nothing to worry about.

②He took a few deep breaths to calm himself down.

(教材P54)Fishermen，tourists，hotels，homes，and cars were swept away by huge waves  caused by the strong earthquake that reached a magnitude of 9.0.

①She refused my suggestion with a wave of her hand.

②He gave us a wave as the bus drove off.

＝He waved to us as the bus drove off.

(教材P54)The undersea  quake struck around 7：00 am Sunday off the west coast of Indonesia's Sumatra Island.

①The clock struck twelve when I got home last night.钟(报时)

②A terrible earthquake did strike the northeast of Japan on March 11.侵袭

③A good idea struck me when I was reading the newspaper.突然想到

④The visitors were struck  by the beauty of the West Lake.打动，迷住

⑤It suddenly struck/hit me that I should pay a visit to my teacher.

(教材P54)However，dangerous conditions and damaged roads will make it difficult to deliver food and supplies.

①It was very considerate of you to deliver milk to our door every morning.

②Hans was asked to deliver(deliver) a speech on the graduation in Harvard University.

③I wonder why you refused to deliver (deliver) my letters to my home last week.

(经典佳句) While online shopping has changed our life，not all of its effects have been positive.

①The measures taken by the local government will come into effect next month.

②There is no doubt that reading books can have a good effect on the children.

③In my opinion，go outdoors and play team games  with  your friends，which is an effective(effect) way to get rid of anger.

(教材P54) The most powerful earthquake in the past 40 years caused a tsunami that crashed into coastlines across Asia yesterday，killing more than  6,500 people in Indonesia，India，Thailand，Malaysia，and at least four other countries.

③He hurried to the theatre，only to find (find) that the tickets had been sold out.

(教材P54)I was having breakfast with my three children when water started filling my home.

①We werehaving (have) a meeting when someone broke in.

②I had just finished my test paper when the bell rang.

③I was about toleave (leave) when it began to rain.

1．It was said that the typhoon(台风)had caused a lot of damage.

2．In the city，the water pipes(管道)in some buildings cracked and burst.

5．I'm very glad that you can write me a summary (概要) of this report.

6．It is very important to keep calm (镇静的) when an earthquake breaks out.

7．Global warming is having a great effect(影响)on hundreds of plant and animal species around the world.

8．They waved (挥手)to us to stay where we were.

9．You have the power(能力) to live it well.

10．You are likely to sing or whistle (吹口哨)when you are happy.

1．To help students deal with their mental problems, we will hold a  lecture delivered(deliver) by a professor from the UK.

2．What's more，it is another effective (effect) way to deal with the problem.

3．They felt it difficult tofinish(finish) the work in such a short time.

5．A wonderful idea struck (strike) me suddenly when I was walking on the street.

6．The dustman swept (sweep) up all the fallen leaves on this street yesterday.

7．The length (long) of the article should be about 800 words.

8．I washaving (have) a discussing with my friend about how to improve my English when my mother called me.

9．It was reported that as many as 157 people died at the air crash.

1．We don't clean the house for a few days，because we don't want to sweep away good luck.

2．A week before Earth Day，posters were put up around our school，calling on us to join in the actions for a greener earth.

3．He must have gone through many difficulties before he succeeded.

4．They had to sleep in the open air after the earthquake.

5．Always have your dictionary on hand when you study.

6．I looked at my husband in shock，waiting for him to tell me that I had misunderstood everything.